Note:  Following last night’s 4-2 win in Columbus the Jets immediately departed for Upstate New York as they have a back-to-back date with the Sabres in Buffalo tonight at 6 pm.  Be sure to stick with our comprehensive coverage throughout the day and following the game.  As always ensure you follow @illegalcurve on twitter.

Note II:  With tonight’s Jets game NHL Mid-Week with Illegal Curve won’t air.  Next time you can hear the guys will be the Illegal Curve Hockey Show on Saturday, November 29th, 2014 from 10 AM until 1 pm.

The Score:  Systems Analyst – How the Jets scored 9 seconds into their game against Columbus.  An interesting analysis of the quick goal scored by the Jets Bryan Little to open last night’s game from former pro hockey player turned writer Justin Bourne.

Sportsnet:  Jets one team looking at Stewart trade.   Whereas they didn’t offer his brother (Anthony) a contract when the Thrashers moved to Winnipeg perhaps they are looking to make amends with his younger brother (Chris).

Winnipeg Free Press:  Not pretty, but effective.  As I’ve said all season long all fans care about is putting a W in the win column and banking points.  If the Jets win tonight they should be in a playoff spot (although teams like Minnesota, Dallas will have game(s) in hand) for the all important US Thanksgiving date.

Winnipeg Sun:  Jets lose Perreault to injury.  The one thing this Jets team cannot really afford are injuries and there is going to have to be some praying that the injury to Mathieu Perreault is not too significant. 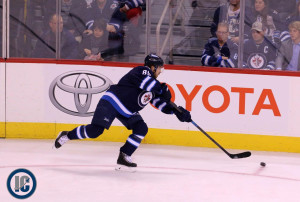 Columbus Dispatch:  Jackets lose fourth straight.  A look at the game from the Columbus perspective.

Sportsnet:  Is Boll’s hit on Postma suspension worthy (video)?  Hockey is such a fast game but that Boll hit sure seemed dangerous.  What did you think?

Illegal Curve:  Jets place T.J. Galiardi on waivers.  We will know around noon whether he clears or not.  Does this spell the end of the GST 2.0?

Buffalo news:  Kaleta takes a turn at center while Gorges is close to returning.  Looks like coach Nolan tossed his players into the blender and Kaleta came out in the middle of the ice.

Buffalo news:  Mitchell earns his way to center stage.  While the Sabres don’t have the big names they have guys who are going to work hard to earn their ice time and Torrey Mitchell is one of those types of players.

Coach Maurice post-game:  Power Play prowess. Thoughts on the club’s performance.  Has Hutchinson done enough to earn another start tomorrow or Friday. What is the status of Perreault.  On not taking Columbus lightly.  When Columbus came within one what did he like that his club did?  Thoughts on Buffalo.  Did Columbus do something differently in the 3rd?