Note:  Jets will practice at the IcePlex at noon today following the 3-1 win over the Devils last night.  Presumably they will be working on the power play which now sits at 9% (29th in NHL).  As always stay tuned to the latest Jets news via our twitter account @illegalcurve.

Winnipeg Free Press:  Experiment exorcises Devils.  The line blending was a success as it got Scheifele, Lowry and Frolik going.  Also helped Perreault erase the goose egg from his goal totals. 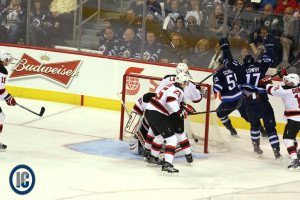 Winnipeg Free Press:  There’s substance to his game.  If the Jets are going to go anywhere they are going to need further progression in Bogosian’s game.

Winnipeg Free Press:  Perreault finally has something to show for hard work.  Always important to get the monkey off your back and now that he’s scored his first of the season, the team has to hope that he will grip his stick a little less tight and have more success putting puck in the net.

Winnipeg Sun:  Jets give Jersey Devil of a time in home ice win.  Read Ken’s breakdown of last night’s win over the Devils.

Winnipeg Sun:  Quick-healing Mark Scheifele bounces back to net game winner.  Fans were pumped when they got word that Scheifele would be in the game after the uncertainty of the injury he sustained in Sunday’s game against the Wild.  His lower body was tested early in the 1st when he walloped the boards with both legs as he slide into them.  The MTS Centre waited with baited breath but the resilient Scheifele bounced up quickly and continued to skate.

Star-Ledger:  Punchless Devils fall to Winnipeg Jets, 3-1.  The only goal that got past Jets goalie Hutchinson allowed was one in which he and Zach Bogosian got tied up.  Devils just didn’t have much to offer last night. 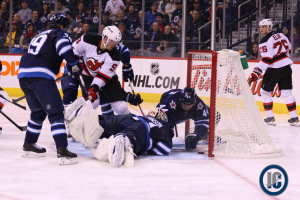 The Telegram:  IceCaps blank Marlies 2-0.   Goalie prospect Connor Hellebuyck posted his first professional shut out as he led his team to victory.

Post-game Podcast:  Host Drew Mindell and analyst Richard Pollock break down the Jets play against the Devils this evening.