Note:  The Jets are in Music City to play their fourth of five on the road as they take on the Predators tonight at Bridgestone Arena starting at 6 pm cst.  Be sure to stick with our comprehensive coverage throughout the day and following the game.  As always ensure you follow @illegalcurve on twitter.

Note II: Join Drew, Richard, and Ezra today, starting at 12 Noon on TSN 1290 Winnipeg, as The Illegal Curve Hockey Show brings you 3 hours of hockey talk. The show will feature analysis of the Jets road trip thus far, as well as previews of today’s game in Nashville, and Sunday’s game in St. Paul.  Guests: Former NHL official Kerry Fraser is featured in the Saturday Spotlight, Josh Cooper of Yahoo Sports on the Nashville Predators, and Steve Carp of the Las Vegas Review Journal.

Winnipeg Free Press:  Scoring? It’s overrated.  When your team is putting wins on the board it is unlikely you will hear many complaints.

Winnipeg Free Press:  Line effective without scoring.  Been quite the dry spell for this trio but you get the sense they are close to making it happen.

Winnipeg Free Press:  Jets taking precautions after mumps outbreak in the NHL.  I can’t recall hearing something like this happening previously.  Good for the Jets being proactive.

Winnipeg Sun:  Jets happy with Byfuglien’s rough and tumble game despite lack of goals.  He has been a force on the ice and while you obviously want goals from him you can see that the Jets 3rd line has gelled a lot more of late.  It’s only a matter of time before he adds some goals to all the hits he’s got on the score sheet. 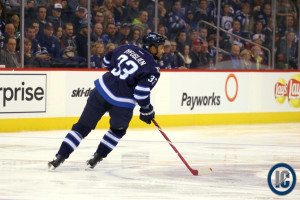 Winnipeg Sun:  Key Central division battle on tap.  The expectation by many prior to the start of the year was that Winnipeg and Nashville would be dueling for 6th and 7th in the division.  Instead tonight’s game represents a battle for 2nd and 3rd.

The Hockey News:  How Blake Wheeler became the heart and soul of the Winnipeg Jets.  This article won’t come as much of a surprise to Jets fans who have seen Wheeler’s emergence as a real leader on this squad.  What fans in Winnipeg will really respect is what Wheeler had to say about living in our fair city on NHL Live last week.

TSN 1290 Winnipeg:  The Big Show (audio).  Dennis Beyak explains that while Zach Bogosian’s offensive game may never fully emerge, the blueliner is more than making up for it with his solid defensive play.

The Tennessean:  Filip Forsberg proud of his plus/minus.  The young Swede is in the top 10 of numerous scoring categories (goals – 9th, assists – 9th, points – 6th) and his play has been a big reason this Nashville team has been such a pleasant surprise for fans in Tennessee.