Note:  The Jets are in Montreal to play their second of five on the road as they take on the Canadiens tonight starting at 6:30 pm cst.  Be sure to stick with our comprehensive coverage throughout the day and following the game.  As always ensure you follow @illegalcurve on twitter.

Winnipeg Free Press:  Extra day of rest to help Jets prepare for this week.  Always a good idea to recharge the batteries and give your players some time to rest for the next challenge.

Winnipeg Free Press:  Montreal offers Jets a chance to match franchise record.  While it is nice to break a franchise record we aren’t exactly talking about surpassing a record of an 80s Oilers team.

Winnipeg Sun:  Three-on-three overtime is key to shutting out shootouts in the NHL.  I’m with Ted.  Do whatever you can to eliminate the shootout.  How many folks would have preferred to see that Jets/Penguins game ended in OT?

Winnipeg Sun:  Jets look to keep it rolling against Habs in Montreal.  It will be a big challenge for Winnipeg as they take on a tough Habs team.  Tonight is Tobias Enstrom’s 500th NHL game 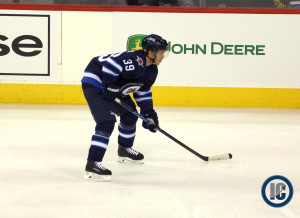 CBC:  No love, no problem for the Winnipeg Jets.  The Jets just can’t seem to get any love, at least not from the media scribes tasked with keeping a close eye on the NHL1 Jeff writes.

USA Today:  Schedule ratings.  A look at the difficulty of schedule on games through this past Sunday has the Jets having the 5th hardest schedule to that point in the NHL.

TSN 1290:  Rona Roundtable (audio).  Shane Hnidy joined Rick Ralph on the Rona Roundtable, saying the Jets have found a way to win but now the challenge is to play that way consistently.

TSN 1050:  Macko and Cauz (audio).  TSN host James Duthie joins the show to chat about how impressive the Winnipeg Jets have been early in the season.

Illegal Curve:  Coach Maurice scrum from Bell Centre (audio).  Getting his team’s energy level back.  On Montreal being a special place to play.  Buying more into his preaching this year more than it was last year?  What does he most attribute Pavelec’s success to?  How does he describe this team’s evolution?  Is it a tougher sell for offensive players (Kane, Scheifele) to buy into a defensive system?  What are the keys to pushing forward?  Is there an advantage to being a team “under the radar”?  What stands out about the Habs?