Note:  The Jets are back in the central time zone to take on the Blackhawks in Chicago to play their last of four on the road at 8 pm cst.  Be sure to stick with our comprehensive coverage throughout the day and following the game.  As always ensure you follow @illegalcurve on twitter.

Ottawa Sun:  Sunday notes.  Bruce Garrioch mentions Byfuglien in his rumour du jour but really its just speculation as to if the Jets GM will make a move.

Winnipeg Free Press:  Road win makes a red-eye nicer.  It makes the flight to Chicago all the easier when you’ve got two points in the bank.  The Hawks played in Toronto (and lost 3-2 in regulation) on Saturday so both teams are in the same position for the game tonight.

Winnipeg Free Press:  Near-perfect Pav snags win.  It certainly looked like the ice was tilted against the Jets and if not for the play of Pavelec it could have easily been a very different outcome. 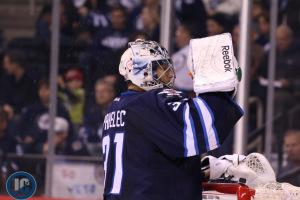 Winnipeg Sun:  Pavelec saves the day.  It certainly seems that we have seen a different Ondrej Pavelec this season.

Globe and Mail:  Kane, Wheeler score in shootout to give Jets win over Rangers.  Kane put the exclamation point on the win with his shootout winner.  He’s n0w 3 for 13 in the shootout (all on the road).

Chicago Tribune:  Jets at Hawks.  Just some info on the Jets opposition.

Coach Maurice post-game presser:  Opening thoughts on the play of Pavelec.  Overall thoughts on his team’s play against Rangers.  Did they take advantage of the Rangers missing two D.  On the turnaround in Chicago.