Note:  The Jets are on Long Island to play their first of four on the road as they take on the Islanders tonight starting at 6 pm cst.  Be sure to stick with our comprehensive coverage throughout the day and following the game.  As always ensure you follow @illegalcurve on twitter.

Winnipeg Free Press:  Schedule throws a haymaker.  Lots of tough competition upcoming and here is really where the Jets will determine how the rest of the year goes.  They cannot afford to fall out of contention, even this early in the season.

Winnipeg Free Press:  Rule 1: don’t make Buff angry.  I suspect fans are hoping he stays angry and plays each and every game in the same manner he did on Sunday.

TSN 1290 Winnipeg:  Home cooking serves up few wins for Jets.  Voice of the Jets Paul Edmonds puts pen to paper as he looks back at the team’s lack of success at home to kick start the season, the talk of a sophomore jinx and ahead to the road trip he and the team departed on yesterday.

Global News:  Little playing big role for Jets.  Russ writes about the quick start for the Alberta product this season. 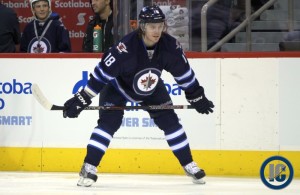 Winnipeg Free Press:  Kane practices with Jets this morning.  He sure looked good on the ice and while it sounds like he won’t be playing this road trip, it sure doesn’t sound like it will be a long time after before he is lacing them up with the rest of the team for a meaningful game.  You can listen to the entire Kane audio scrum here (broken down by question).

Winnipeg Sun:  Hitting the road on a high note.  Paul writes about the highs and lows this team has already experienced and how they head out on the road a bit lighter and ready to take on a tough challenge.

Illegal Curve:  Coach Maurice post-practice scrum (audio).  On Kane and Peluso.  Bogosian/Enstrom (Maintenance).  How much could his lineup have used Kane?  The good and bad of yesterday’s game.  Anything consistent about the fast break opportunities?  Nine of the next 11 on the road, are there gonna be any strategy adjustments?

TSN 1290 Winnipeg:  The Big Show (audio).  With Evander Kane joining the Jets on their upcoming four-game road trip, Shane Hnidy talks about an unlikely spot in the lineup which may be best for both him and the Jets, in order to kick-start the team’s stagnant offense.

Newsday:  Defense producing on offense.  Always good when you are getting production from the back end.  Isles beat writer Arthur Staple also has some notes and quotes at the end of the column which are relevant for tonight’s game.