Note:  Jets will be practicing at 11 am at the MTS IcePlex before they head to New York state to start their four game road trip.

Winnipeg Free Press:  Win a blueprint for Jets’ future.  While it wasn’t the prettiest of wins the Jets were able to bank two points  and that is why we may have seen the recipe for success last night.

Winnipeg Free Press:  Supersonic Wheeler’s defensive gem saves the day.  Not sure if the back check was more impressive than the leap that Ondrej Pavelec managed so as to avoid being steamrolled by the big winger.

Winnipeg Free Press:  Getting the hang of it.  Limiting mistakes and preying upon your opponents is what the Jets bench boss would like to see from his squad.

Winnipeg Sun:  Sigh of relief from Jets win.  It wasn’t the best five game home stand but it ended with an important divisional win and left fans and Dustin Byfuglien smiling. 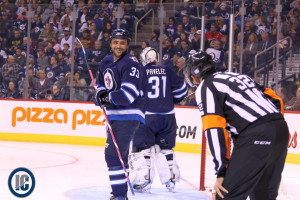 Illegal Curve:  Evander Kane status update.  In last night’s chat with the media, coach Maurice revealed that the young sniper would be on the road with the Jets, although it seems unlikely he will see any play with the team.

Sportsnet:  Byfuglien the battering ram (video).  It was a series of plays that woke up the MTS Centre crowd during the 2nd period.

Post-game podcast from the Press box: Host Drew Mindell and analyst Richard Pollock breaks down the Jets play against the Avalanche.

Saturday Spotlight:  Born in Manitoba, Andy Murray is the current Head Coach of the Western Michigan Broncos. He’s coached the LA Kings and St. Louis Blues and was inducted into the International Ice Hockey Federation Hall of Fame in 2012. He joined Drew Mindell for this week’s Saturday Spotlight.