Note:  The Jets take on the Hurricanes in the third home game of the season tonight at the MTS Centre starting at 7 pm.  Be sure to stick with our comprehensive coverage throughout the day and following the game.  As always ensure you follow @illegalcurve on twitter.

Winnipeg Free Press:  Perreault knows value of resilience.  Jets fans have to hope he can bring some of that Ducks winning attitude and confidence to the room.

Winnipeg Free Press:  Pavelec not the problem.  Good to hear the Jets netminder not reference Winnipeg as some sort of exception to the rule when it comes to expectations.

Winnipeg Free Press:  F-bombs AWAY.  It was a bit tense during the media scrum yesterday and we saw the Jets coach allow his frustration get the better of him during a line of questioning from the assembled scribes.

Winnipeg Sun:  Jets’ frustration showing through a day after falling to 1-4.  Not that any team likes losing but it is pretty clear this group is sick and tired of answering the same questions over and over again.

CBC:  Paul Maurice drops f-bomb when asked about Jets’ performance.  To the coach’s credit he clearly knew he had made a mistake and immediately apologized for the profanity.  To be honest the swearing doesn’t bother me but what is slightly confusing is what he meant “I could make you cry…”.

Sportsnet:  Jets flying low on confidence (video).  Sean Reynolds reports on the frustration is setting in for the Jets after a slow start to the season. 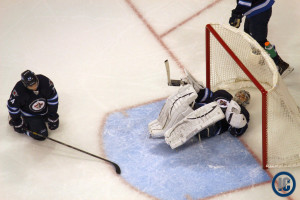 Illegal Curve:  Coach Maurice scrum (audio).  What was the thinking behind no skate today? Is this a fragile team?  What can he do to change that reaction?  Does the team need to be more vocal?  What did he think of Perreault on the wing?  Is there something he’s experienced in the past that can help him with this group?  Not an easy thing to do.  Did he have some sense of it before he came into this environment?  Is it hard to break out of patterns?  Who does this team take its cues from?  Who does this team takes its cues from on a player level?  Is it hard for a young player to exert what he wants in a locker room (ex. Scheifele)?  Is it concerning when he hears his players talk about their confidence being low?  Game changing players?  Does he think this group can grow under what he is trying to show them and try to be effective?  Then its not time to break up this group?

News and Observer:  ‘Hungry’ Canes head out on the road.  Always a great read from Chip Alexander on the latest Hurricanes news.