Note: Jets practice at the MTS Centre at noon.  It is closed to the public.  But we will be there and you can stay tuned with us via twitter @illegalcurve.

Winnipeg Free Press:  Jets can’t stand success.  The Jets had a chance to keep it rolling last night but just couldn’t sustain it past the first twenty minutes.

Winnipeg Free Press:  Has it already gone sideways for the Jets?  So is it time to hit the panic button or do you think the Jets can right the ship? 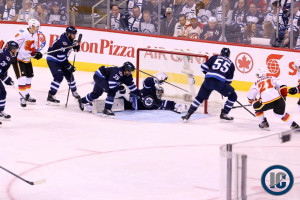 Winnipeg Sun:  Jets can’t stick to plan.  There has been plenty of discussion of a game plan that coach Maurice would like to see implemented.  Perhaps we saw it during the first period but it is a sixty minute game.

CBC:  Fans react as Jets hit new low in loss to Flames.  Fans were heading for the exits well before the 3rd period was coming to a close last night and those who were left ended the evening with boo birds so you know that fan patience is wearing thin with this team.

Saturday Spotlight:  The second episode of our new feature had Richard chatting with former NHL goalie Marty Biron about everything from his time in the NHL, his post playing career, a possible return of NHL hockey to Quebec City and a lot more.