Note:  The Jets take on the Flames in the second home game of the season tonight at the MTS Centre starting at 6 pm.  Be sure to stick with our comprehensive coverage throughout the day and following the game.  As always ensure you follow @illegalcurve on twitter.

Note II:  Here are the projected lineups for the Jets and Flames ahead of tonight’s game at the MTS Centre.

Winnipeg Free Press:  Move brings back memories for Perreault.  Gonna be some tinkering as coach Maurice tries to find the winning combination.

Winnipeg Free Press:  Lowry man in the middle.  It sounded like the Jets were gonna give the young prospect some time before a possible move to centre but the necessity sees him moving into the middle. 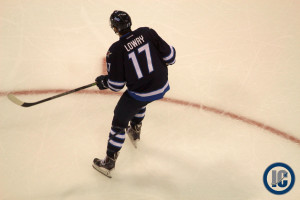 Winnipeg Free Press:  Simple things are key.  The Jets are hoping a return to basics can help them get on the winning side of the equation.

Winnipeg Sun:  Jets juggle lines as they prepare to face Flames.  It isn’t time to panic but coach Maurice is making some moves hoping to foster some more chemistry which will result in my goal production.

Illegal Curve:  Can Grant Clitsome crack  the Jets top 6?  The question was posed to coach Maurice yesterday and it appears that right now the answer is no.  This isn’t good considering that he is being paid just below a number four defenceman in the NHL.

Illegal Curve:  Coach Maurice scrum (audio).  Line changes (moving Lowry to centre).  Blake Wheeler’s status.  On moving Perreault.  Bigger adjustment for Lowry or Perreault?  Thoughts on Galiardi’s game.  Thoughts after watching last night’s video?  What does Grant Clitsome have to do to get in the lineup?

Illegal Curve:  Jets home opener pre-game ceremony.  If you weren’t in attendance and wanted to see how the ceremony unfolded on Friday night we have you covered.

Calgary Sun:  TJ Brodie & Mark Giordano give Flames one of NHL’s most under-rated pairings.  The headline was stolen out of Ezzy’s mouth as that is exactly what he said on yesterday’s IC Hockey show.  Read the article to get a better understanding of this duo.

Calgary Herald:  Practice notes.  Looks like the Flames had some bumps following a Friday night loss in Columbus and the Jets may see their second former player (Setoguchi) return to play for the visiting team as he may be back in the lineup following his being a healthy scratch.

Saturday Spotlight:  The second episode of our new feature had Richard chatting with former NHL goalie Marty Biron about everything from his time in the NHL, his post playing career, a possible return of NHL hockey to Quebec City and a lot more.