Note:  The Jets return home following a one win, two loss road trip to open  the 2014-15 season.  The team is off today and they return to practice on Tuesday at the IcePlex.

Winnipeg Sun:  Jets get royally thumped by Kings.  Ken breaks down the game.  Includes an ‘Around the Glass’ feature which talks about the penalty kill, the lineup change and IceCaps news.

Winnipeg Sun:  Stuart joins the 500 club.  The Minnesota native has likely endured a lot of pain in each of those games considering the way he plays each and every game. 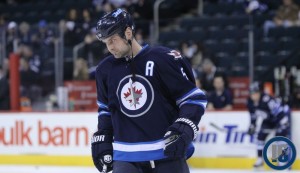 Illegal Curve:  Nic Petan injured in game against Seattle.  On Saturday the Jets second round pick in 2013 was knocked out of the game by the Thunderbirds Evan Wardley.

Saturday Spotlight:  On the first edition of the Saturday Spotlight, Illegal Curve’s Richard Pollock talked with Winnipeg Jets play-by-play voice on TSN 1290 Winnipeg Paul Edmonds about a variety of topics including; growing up in Winnipeg, how he got into radio, his time with the Goldeyes and transitioning to working with the Winnipeg Jets.