Note: The Illegal Curve Hockey Show will be on TSN 1290 Radio today from 12 Noon – 3:00 PM.  Join Drew, Richard and Ezra as they analyze the Jets’ season opening win versus Arizona, discuss what the Evander Kane injury means for the Jets, both short-term and long-term, and preview Saturday night’s game versus San Jose, and Sunday night’s game versus the Los Angeles Kings.  We are also introducing a new weekly feature entitled Saturday Spotlight which will present a more in-depth, one on one interview between Richard and people in the game.  First up will be play by play voice of the Jets on TSN 1290 Winnipeg Paul Edmonds.  Guests:  Jim Fox (Kings analyst on Fox Sports West), Bret Hedican (former NHL player).  Tune in here.

Winnipeg Free Press:  Bogo off to promising start at plus-three.  Jets fans are certainly looking for the defenceman to take that next step in his career.

Winnipeg Free Press:  Big Buff feeling greeeeat!  Plenty of laughs and smiles from the Jets winger following a productive first game of the season.  He adds some grit to the speed of the Jets 2nd line. 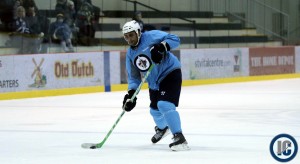 Winnipeg Sun:  Fingers crossed for Kane.  The Jets still didn’t have an update on the sniper (stay tuned to @illegalcurve for any further developments) but of course the team is hoping that it isn’t too significant.  Ken writes about the injury and Mark Scheifele’s comments on the collision.

Illegal Curve:  Coach Maurice scrum from California (audio).  Were they as good as everyone thought they were after a night’s sleep?  Update on Evander Kane?  Where was Michael Frolik from practice?  Does he expect to have Evander at all this weekend?  Does he expect to see Michael Hutchinson this weekend?  Might it depend on Pavelec’s workload?  What does he like about Byfuglien with Wheeler/Scheifele?  Who might draw in for Kane?  Thoughts on the power play.  Thoughts on Adam Lowry’s first game.  Did he watch the Sharks game vs. L.A.?  Any thoughts on road teams spoiling home owners?

TSN 1290  Winnipeg:  Rona Roundtable (audio).  Former NHL Goaltender and Goalie Coach Corey Hirsch joined Rick Ralph on the Rona Roundtable and said that we’ve seen Ondrej Pavelec play well but the key to this season will be to play well consistently on a nightly basis.

The Telegram:  In a crowded crease, Hellebuyck wants to play.  A long but a good read from Robin Short but a good one to get an idea of what is happening with the goalies over in St. John’s.