Note:  Today is the day fans have been waiting for as the NHL season gets underway.  The Jets won’t be kicking off their season until tomorrow night in Arizona.  Today they will be practicing at the IcePlex with the players on the ice at 11 am.  Be sure to stick to @illegalcurve for all the latest news.

Note II:  Not only is tonight the start of the NHL season, it is also the season premiere of NHL Mid-Week with Illegal Curve Hockey, on TSN 1290 Winnipeg.  Join Drew, Richard and Ezra starting at 6:00 PM, as the guys preview tomorrow night’s Jets-Coyotes game with Coyotes TV analyst Tyson Nash, and discuss the New York Islanders recent acquisitions of Johnny Boychuk and Nick Leddy, with Islanders beat writer Arthur Staple of Newsday newspaper.  All of this, and the guys will make their season predictions, and discuss various Jets over/under questions beginning at 6:00 PM on TSN 1290 Radio.

Globe and Mail:  Canada’s captains reveal truths of life and hockey.  Eric Duhatschek spoke to four of the seven captains of Canada’s NHL teams (although all seven are featured in this article) as part of their season preview including the Jets Andrew Ladd.

Winnipeg Free Press:  Temper your expectations on Bogosian.  Gary writes about whether or not this is the year the Jets find out what they truly have in the New York native.

Winnipeg Free Press:  Scheifele plans to SOAR as a sophmore.  He certainly sounds like a player who spent his entire summer getting ready to show fans, management and his teammates what he is made of this year.

Winnipeg Free Press:  Maurice is ready for the real games.  You can read about the Jets bench boss being ready for the regular season to start.  In addition there is a video that you can watch entitled ‘Jets This Week’ featuring WFP writers Gary Lawless and Tim Campbell.

Winnipeg Sun:  Decline of enforcer concern for Thorburn.  He was asked to do a lot more by coach Maurice than simply drop his gloves upon request by the opposing team’s enforcer.  Of course he never really showed any concern when tasked with the role of pugilist. 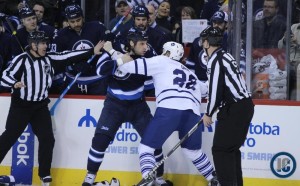 Winnipeg Sun:  Peter Budaj says he’ll honour contract, try to play his way back to Jets.  After it was determined that the Jets would stick with Michael Hutchinson the concern was two-fold as to whether or not Budaj would clear waivers and whether he would report to the IceCaps.  It seems the veteran goalie, while disappointed that he was unable to challenge for a spot in camp, has a good attitude.  Of course earning 1.4 million in the minors helps offset any pain of the demotion.

Winnipeg Sun:  Scheifele wants to be one of NHL’s elite players.  Interesting comments by the first ever draft pick in this organizations history.  Many pundits feel he is capable of elite levels and we shall see if he can achieve his goals playing with talented teammates in Wheeler and Kane.

Winnipeg Sun:  Perreault brings offensive punch and expertise in faceoff circle to Jets.  Plenty of platitudes being thrown at the centre as he is expected to really help the Jets 3rd line and give them a more capable face off specialist.

Winnipeg Sun:  Make or break year for Winnipeg Jets goalie Ondrej Pavelec.  He has the eyes of Jets nation solidly watching each and every save or goal against as if it is make it or break it.  If confidence is important it is probably best he continues to stay off social media and avoids watching what the TV pundits are saying.

Winnipeg Sun:  Jets were better on the blue-line after Byfuglien moved to forward.  There seems to be a lot of controversy as to whether Byfuglien was better as a defenceman, a forward or a hybrid of the two.  What do you think?  Where did you prefer seeing the Jets rover.

Winnipeg Sun:  Evolution of Blake Wheeler – Late bloomer has grown into top scorer and leader.  It is clear that the dynamic Minnesotan has brought his game to the next level and Jets management and fans are hoping that this upward trend continues if the team hopes to achieve a playoff birth. 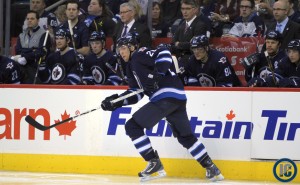 Winnipeg Sun: Secondary scoring and defence from the forwards are key for Jets.  A big key will be balance.  Can this team get enough from the bottom 6 to help take the team to the next level?

Winnipeg Sun:  Paul Maurice was born to be a coach.  High praise coming from across the NHL for the Jets bench boss as he begins his first full season in Winnipeg.

Winnipeg Sun:  GM Kevin Cheveldayoff keeps it slow and steady.  While hockey people seem to think that the Jets GM is capable he certainly has his detractors who feel he still needs to make some moves in order to put his brand on this team.  Where do you stand?  Do you like the trajectory of the Jets or do you feel that every other team also “drafts and develops”?

Winnipeg Sun:  Jets owner Mark Chipman feels enormous responsibility to community.  One thing you can say about the Jets co-owner is that he is ultra competitive and he wants to build a winner in this community that won’t simply be a one and done.

Winnipeg Sun:  It’s high time for the Jets to produce a team that pushes for playoffs.  Paul says the time for excuses is over as the anchors that previously hung around this team’s neck has been largely removed.  Of course he acknowledges that the very real superpowers of the Western Conference remain directly in the Jets path.

Winnipeg Sun:  Can Paul Maurice be the X-factor.  Ken asks the questions that fans are wondering including: 1) How many points is a full season under Paul Maurice worth? 2) Will Ondrej Pavelec take the next step in his career? 3) Just how many goals will Evander Kane score? 4) Has Dustin Byfuglien embraced the move to forward? and  5) Can the Jets lock up Michael Frolik long-term?

Winnipeg Sun:  Jets are trying to build franchise that will win consistently.  Teams like Chicago, St. Louis and LA weren’t built with one trade deadline deal or one really good draft.  In the normal course it takes time to build a consistent winner.  Of course counseling patience is a lot easier said than done.

CBC:  Forecasting a new Winnipeg Jets season.  As the season kicks off Mitch analyzes the things the Jets need to do to find success this season including five thing that will need to happen for this team to push for a playoff spot.  He also looks at the opposite possibility and analyzes why the Jets will be out of the playoff mix and may be in the running for a top five pick looking at five things that could cause same.  He concludes his article with the inevitable ‘So what’s going to happen?’ and as Mitch suggests that is anyone’s guess.

Metro News:  Ehlers brings lessons learned in Winnipeg back to Halifax.  An extremely positive attitude from the Jets first selection in 2014 as he continues to learn and further develop his game in the junior ranks.

Sportsnet:  NHL 7 in 7 – Jets need to rise to occasion (video).  Starts with an introduction by Sean Reynolds talking about the team. and then the video ends with the Sportsnet panel (Daren Millard, Nick Kypreos & Damien Cox) breaking down the team even further.

TSN:  Jets season preview (video).  This one starts with an intro by Sara Orlesky.  Then switches to the TSN Panel chaired by James Duthie and the analysis is offered by Bob McKenzie,  Aaron Ward and Ray Ferraro.

TSN 1290 Winnipeg:  Hustler and Lawless (audio).  General Manager Kevin Cheveldayoff joins Hustler & Lawless to share his thoughts on training camp and the Jets prospects, Adam Lowry earning a spot on the opening day roster, and Anthony Peluso’s perceived role as an enforcer. Cheveldayoff also discusses the Tangradi-Budaj trade, whether he envisions Dustin Byfuglien as a forward or defenceman, and says he would welcome Alex Burmistrov back to the team.

TSN 1290 Winnipeg:  Rona Roundtable (audio).  While Dustin Byfuglien is starting the season as a forward, everybody wants to debate whether he should remain there or go back to defense. Shane Hnidy joined Rick Ralph on the Rona Roundtable and said to wait a few games before jumping to any conclusions.

Illegal Curve:  Jets roster down to 23.  The Jets released the roster which is at 23 with two players on the injured list.