Note:  Today is day 15 as Jets training camp enters the final weekend of the pre-season.  The team played last night in Calgary so practice is a bit later today starting at 11:30 am at the MTS Centre.  Practice is closed to the public.   Be sure to stick to @illegalcurve for all the latest news.

Winnipeg Free Press:  Fans fired up over Petan.  Plenty of fans are liking the skill and offensive displays they have seen demonstrated throughout the six games he has played during the exhibition schedule. 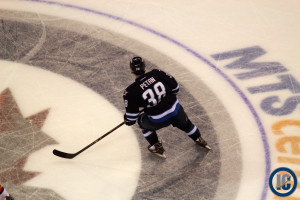 Winnipeg Free Press:  Flames youngsters burn Jets.  It wasn’t the prettiest of affairs.  Tim writes about the offence, the Bogosian injury, the challenge of finishing, and Hucthinson being back to form.

TSN:  Bogosian injured in Jets loss to Flames.  It happened in the 2nd period of the game in a play with Flames rookie Sam Bennett.  Much to Jets fans chagrin it was reported that Bogosian wouldn’t return for the 3rd period.

Winnipeg Sun:  Jets trying to take the next step.  Ken examines whether this could be the year the Jets finally make the playoffs.   A longer read but well worth it.

CBC:  To perform on the ice, Jets’ top line must gel off it.  Fans and pundits alike are regarded these three as the Jets first line and if they can perform to those expectations you can expect to see some joy in joy land.

Coach Maurice post-game:  Thoughts on the game.  Simply pre-season hockey?  Thoughts on Hutchinson’s play?  What can he say about Zach Bogosian’s status?  Is he going to press his team if he wasn’t impressed with the effort?