Note:  Day 14 of the Jets training camp kicks off as the Jets head to the IcePlex to practice at 10 am.  Here is the Jets projected lineup for tonight’s game against the Flames in Calgary which starts at 8 pm cst.  Be sure to stick to @illegalcurve for all the latest news.

Winnipeg Free Press:  Best-laid plans GO AWRY.  Giving some of the kids an extended look due to veteran injury may be good instead of having already sent them back to Jr or to the AHL.

Winnipeg Sun:  Who will knock down the door and win a job with the Jets?  Still some questions remain as we get down towards the end of training camp.  Which players do you think deserve a chance to those final few available spots on the roster. 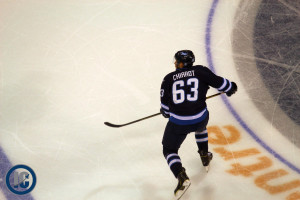 Winnipeg Sun:  Defenceman Paul Postma can’t seem to buy a break.   Every time the young d-man gets a bit of momentum he has it arrested.  Hard to show the coach what you’ve got when you cannot get on the ice.  Ken also writes about the Jets getting their training camp lineup down to 32 as well as an interesting waiver wire option.

CBC:  Questions surround Winnipeg Jets’ depth line heading into season.  Jeff writes about new addition centre Mathieu Perreault and who we may see him playing with this season.

Globe and Mail:  Coach Maurice says injuries could keep roster full.  At this point in the pre-season the coach would ideally have as close to his regular season roster as possible but injuries have precluded that.

TSN 1290 Winnipeg:  Rona Roundtable (audio).  Shane Hnidy discusses the recent cuts by the Winnipeg Jets and that some younger players will see some more time at the NHL level due to a number of injuries.

Illegal Curve:  Jets re-assign five to IceCaps.  The training camp roster is down to 32 as the Jets removed another five guys from the NHL and sent them to St.John’s.