Note:  Day 13 of the Jets training camp kicks off with a slight change of plans as the Jets head to the IcePlex to practice at noon.  Here is an updated roster (down to 32 players).  Be sure to stick to @illegalcurve for all the latest news.

Winnipeg Free Press:  Confident Ehlers fighting to stay, pots his first NHL goal.  He still seemed amazed about his first NHL goal.  When I asked him about it post game his response was “I didn’t know how to react”.  I suspect once he makes it permanently to the NHL he will quickly figure it out.

Winnipeg Free Press:  Don’t expect to see new-look blue-line.   There is going to be a lot of reliance on an improved D if coach Maurice is going to achieve his goals for this season.

Winnipeg Free Press:  Big battle to stay in Winnipeg.  Halischuk has shown a lot of jump this pre-season as he fights to show the brass that he deserves a spot on this roster.  Tim also covers the rookie success last night, Pavelec’s confidence, sharpness of lines improving and the clock is ticking on the pre-season. 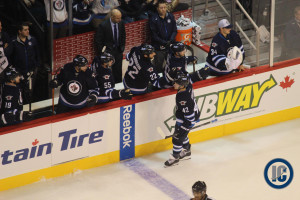 Winnipeg Free Press:  Injuries force coach’s hand.  A rash of injuries just as the coach is getting ready to refine his lineup is probably coach Maurice’s worst nightmare.  From the sounds of it the injuries aren’t too severe and he should have his lineup soon enough.

Winnipeg Sun:  Maurice training camp ‘a challenge’.   All players had fair warning from their head coach that this would be a training camp that wouldn’t be easy.

Winnipeg Sun:  Pavelec comes up big.  The focus will continue to be on the Jets netminder.

TSN 1290 Winnipeg:  Rona Roundtable (audio).  Shane Hnidy says that Adam Lowry has excelled at training camp and should be on the Jets roster for opening day while Josh Morrissey may not have had the best camp but should see some time with the big club to start the season.

Post-game Podcast:  Host Drew Mindell and analyst Richard Pollock break down the Jets play against the Senators this evening.