Note:  Day 12 of the Jets training camp kicks off with one group on the ice at the MTS Centre at 11 am.  Here is tonight’s (updated) roster.  We will have the projected lines once practice is over.  Be sure to stick to @illegalcurve for all the latest news.

Note II:  The Jets will face the Senators tonight at the MTS Centre starting at 7 pm.  As always stay tuned for all the post-game reaction from both the Jets and Senators room.  In addition we will have coach Maurice’s post-game news conference and our Illegal Curve Hockey Postgame Podcast from the Pressbox.

Winnipeg Free Press:  Wheeler confident Jets on right track.  Gary writes about the desire to win and the fact that the rangy winger from Minnesota feels he can accomplish this with the group Winnipeg is building with.

Winnipeg Free Press:  Uh-oh, more goalie worries.  Is it time to panic yet?  After discussing the goalie situation Ed provides a prospect report and his two Jets who stood out in the game. 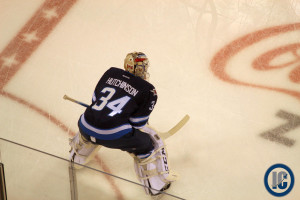 Edmonton Sun:  Pair of Taylor Hall goals for Oilers in second put game out of reach for Jets.  The Oilers big guns stepped up their game last night.

Winnipeg Sun:  Galiardi’s eye on the mend.  Appears that he was “lucky” in that it could have been a lot worse.  Jets have to hope with the rash of recent injuries he will be back in the lineup sooner rather than later.

CBC:  The debate over prospect Josh Morrissey.  Plenty of debate going on as to whether he should stay or go.  What say you?

Sportsnet:  Top 4 prospects getting lots of time.  Coach Maurice and his staff are sure seeing a full picture of what their young guns are capable of during the pre-season.

National Post:  Scheifele plays game with name oddly misspelled on jersey.  A little unusual but these are the mistakes that can happen in pre-season.

Icethetics:  NHL Soccer crossover.  The guys who are always doing interesting stuff with jerseys have modified all 30 NHL teams hockey jerseys into a soccer concept.  What are your thoughts on the Jets gear?

Coach Maurice post-game:  How does he assess that game? Any individuals stand out for him?  What made that line (Lowry-Perreault-Frolik) so successful tonight?  Updates on injured players (Tangradi, Cormier).  Is he getting some answers to his questions?  Does he need to get numbers down to make it easier for himself?  What did he think of Danny Taylor?  Thoughts on Hutchinson?