The veteran forward left the game and did not return due to an upper-body injury. 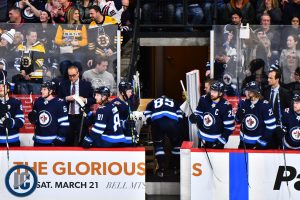 In a tightly contested contest the Bruins Karson Kuhlman laid a big body-check on Mathieu Perreault who was slow to get up and went down the tunnel to the Jets dressing room.

If you missed the hit here it is:

Luca Sbisa objects to this hit from Karson Kuhlman on Mathieu Perreault.

He drops the gloves with Kuhlman. pic.twitter.com/yFcrI0KeHh

Jets PR would later indicate that “Mathieu Perreault will not return to tonight’s game due to an upper body injury”.

Following the game Jets bench boss Paul Maurice didn’t have much of an update simply saying “Nothing yet.  But I’ll give you something tomorrow.  I’ll have a better idea tomorrow.”.