The journeyman defenceman has two goals, eight assists in 44 games for the Jets this season 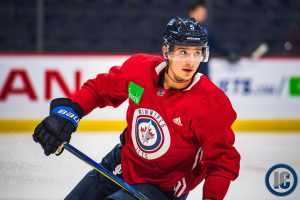 Just when the Jets were almost completely healthy on defence Paul Maurice announced today following his media availability that veteran defenceman Luca Sbisa will miss at least a week with an upper-body injury. Maurice said that Sbisa will need to be re-evaluated over the next few days.

Sbisa, 29, has played the last couple of games for the Jets and has played 44 games in total this season (two goals, eight assists) after being claimed off waivers from the Anaheim Ducks.

Sami Niku will come back into the lineup for the Jets tonight versus the LA Kings.

Game 61: Jets vs. Kings projected lines
Winnipeg Jets acquire Dylan DeMelo from the Senators for a third round pick in 2020