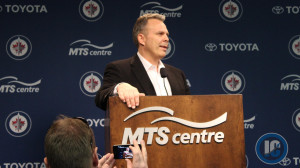 “I made the decision with lots of conversation with my staff and ownership. The decision was mine”

“I would say no” -Kevin Cheveldayoff when asked if he did everything he could to help Claude succeed.

“I feel for the fans, I’d love this to happen quicker. The passion that’s exuded by our fans is tremendous.”

“We envisioned we would be higher in the standings”

Paul Maurice was given a contract until the end of the season. Nothing on paper, Chevy says they had a handshake over the phone.

Chevy met personally with Claude and Perry today at MTS Centre and informed them of the decisions. He then met with the players at IcePlex.