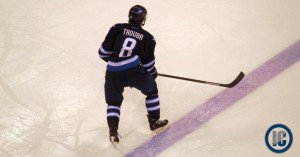 Kevin Cheveldayoff, General Manager of the Winnipeg Jets Hockey Club, has issued the following statement today in regards to the condition of defenceman Jacob Trouba:

“Last week, following Team USA’s game versus Latvia at the IIHF World Championships in Minsk, Belarus, Jacob experienced some discomfort in his neck. After consultation with the Team USA medical staff and officials, it was determined that he should return to Winnipeg as a precaution due to his previous injury history. Jacob flew to Winnipeg this past weekend and met with team doctors for a series of tests which revealed he had sustained a mild neck strain. This will not affect Jacob’s off-season training or preparation for next season’s training camp in any way.”

Disappointed to come home early from the World Championships. Thankful there was no serious injury, this neck has to last me my whole life.