The latest on the three Jets who wore yellow, non-contact jerseys at practice. 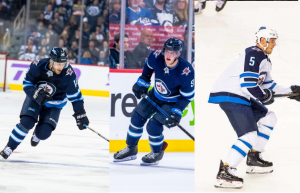 Some familiar faces were back on the ice for the Jets today as Bryan Little, Andrew Copp and Dmitry Kulikov wore yellow, non-contact uniforms today at Jets practice in Winnipeg.  Following same bench boss Paul Maurice provided updates on the three:

Bryan’s still in an every second day on and off the ice. He’s kind of heart rate restrained right now. We keep it to a certain level and just slowly building on it.  So there is no timeframe.

“Both are possible for this road trip at some point. So they started bumping today. Then they need to feel good tomorrow, do it again and then hit enough days that we can get them up to skating them hard but also adding some bumping into that.  It is possible we could see them on this trip.  It’s also within the realm of them being healthy and not having a setback that they wouldn’t play.  We will just see how the next week goes.”

He added that Bryan Little will not be on the upcoming four-game road trip while Copp and Kulikov will be.