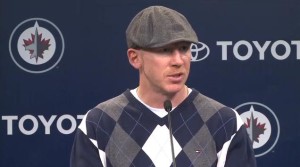 Here is the Jets release:

The Winnipeg Jets are pleased to announce they have hired Mike Keane as Player Development Assistant. He will be working closely with Jimmy Roy, who is the Coordinator of Player Development. Keane will focus mainly on amateur and professional teams, with a particular emphasis in the evaluation and development of players with the St. John’s IceCaps.

The Winnipeg, MB native finished his playing career with the Manitoba Moose, playing in his hometown from 2005 to 2010. In his time with the Moose, Keane played in 365 career games for 114 career points (36G, 78A) and 244 career penalty minutes.

For more information check out the Winnipeg Jets official site.