The Jets GM spoke to the media today. Primarily about the Clitsome signing.

The Jets GM spoke to the media today.  Primarily about the Clitsome signing but of course touched on other issues like RFA and UFA news. 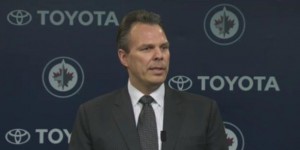 Listen to the teleconference:

If you cannot listen while at work here are some of the comments he made and which we tweeted;

– Clitsome is a player who seemed to improve his game as the games got more important last year.

– Clitsome is younger than many of the UFA defenseman, works very hard, and we think his game is going to grow still.

– Clitsome is very versatile. “Tremendous two-way defenseman”. We still think there is room for him to improve and grow.

– We were looking for a left-shot defenseman Grant fits that description. Gives us different options. Became stronger down the stretch.

– Too soon to say that the Clitsome signing finalizes the top 6 defenseman, too many moving parts still.

– Still working on getting RFA deals done. Focus has switched from the draft to free-agency period. Looking at all the options.

– Conversations had been on-going for a while, but as we got closer to the UFA discussion period, decisions were made re: Clitsome

– A little bit of negotiation in the last hours last night, but both sides had laid their cards during a meeting at the draft.

– “We are active in the currently on-goin UFA conversation period”

– We are in an interesting time, a little nuanced period with regard to free agency.

– We are having on-going conversations with Al Montoya and his agent, including as recently as last night.

– Like any big business, no deal is finalized until it is signed (with regard to reaching an oral agreement with a player.)

– Before we acquired Clitsome off waivers, we had a lot of good insight into him as a person and a player. Still young as a player.

– Trying to get better with players who have yet to reach their ceiling. Not a surprise to us that Clitsome wanted to stay here.

– Takes time for a defenseman to mature. Grant’s dev. process is still on-going & he will get a good chance to continue to improve.