The Jets GM chatted with Dennis Beyak on the Jets first half of the season. 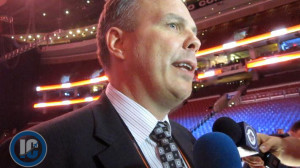 During the 1st period intermission Jets GM Kevin Cheveldayoff joined TSN’s Dennis Beyak for a Q & A as his team hits the mid way point in the 2014/15 season.

Beyak:  Game 41 of the season for your team, a first half recap, a report card on your team.

Cheveldayoff:  There have been so many things that have happened to this team.  Obviously we didn’t get off to the greatest start that we wanted to at the beginning of the season.  We found a way to fight through that from an adversity stand point and obviously as of late hitting the injury side of things, so all in all it’s definitely a marathon and certainly you are at the half way point and you assess where some things are at but you also have to live day to day as well.  We got Zach Bogosian back today and we’ll look forward to getting a couple of guys back hopefully in the coming days and in the coming weeks and just keep assessing as we go along.

Beyak:  What do you like best about your group?

Cheveldayoff:  I think it’s been that workmanlike attitude.  It’s been that kind of bring that same work ethic each and every night.   Certainly there are going to be nights that its going to be more apparent than not, but for the most part behind the scenes, behind closed doors its the way that they talk, the way they carry themselves with respect to what they want to be as a team and how they feel they are going to be successful as a group.

Beyak: Would that fall under the term of identity?

Cheveldayoff:  I think each and every year you have to re-create yourself and with the group of guys that are there we have several new guys from a young (player) stand point in the lineup and certainly they are looking to create not only their identity but carve their own niche in the NHL.  I think the addition of Perreault has taken some time to find his way to kind of fit in with the group.  But I think as a group their is a solid belief, solid feeling that we can be successful if we play like that and certainly the job that Paul and the coaching staff have done since Day 1…… it’s hard to explain but it’s been that constant feeling that they’ve instilled from the moment that we stepped on the ice at training camp.

Beyak:  When everyone is back you are going to have a lot of defenceman.

Cheveldayoff:  Let’s worry about that when we get there.  I’ve heard people say that several times over.  Obviously as you’ve seen today Grant Clitsome has back surgery and will be out for an extended period of time.  In this game you never know!  It is shift to shift, period to period.  But again, we will look at all our options.  If there is an opportunity there then we will see what plays out.

Ends the interview with a question about the play of the Jets prospects at the World Juniors.