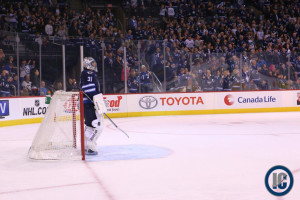 Winnipeg Sun:  Jets look to stop the bleeding in Vancouver.  No time like the present as the teams that are chasing the Jets are closing the gap in the standings.

Illegal Curve:  Coach Maurice pre-game scrum (audio).  Getting back on track tonight.  Is it a mental or physical issue?  Good start to the game against Calgary, bringing that element into tonight’s game.  Is it easier to get players to buy in when they are winning?  Scheifele’s goal drought.  Is he still a pass first player?  Still seeing good things in the 200 ft game from Scheifele?  Is it the goalies or what is happening in front of them?  On Hutchinson working on the little details.   Tough to make the jump from playing as back-up to more frequently.  Importance of tonight’s game.  His thoughts on the Canucks.  Considering any changes?  Will the pairings stay the same?

Illegal Curve:  Jets vs. Canucks projected lineups.  Take a look at what the lines looked like after practice today and what combos you should expect to see at Rogers Arena this evening.

TSN 1290 Winnipeg:  The Big Show (audio).   Paul Edmonds joins The Big Show to explain why the ball may be back in Ondrej Pavelec’s court to regain control of the Jets’ net.

TSN 1040 Vancouver:  The Bro Jake Show (audio).  TSN hockey insider Bob McKenzie joins the Bro Jake Show to explain why he thinks the Jets are for real, and along with the Canucks and Flames, will likely be in the mix for the final playoff spots in the Western Conference.

TSN:  That’s Hockey 2 Nite (video).   The Jets have now lost four straight games, TH2N looks at a couple of bad habits they are falling into and why that cost them against the Flames.