Following an MRI on Friday the Jets updated media about the sniper’s status. 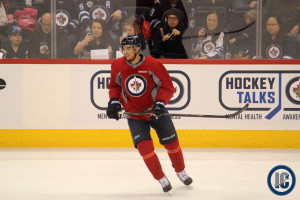 If you missed it Thursday night in the season opener the Jets Evander Kane collided with line mate Mark Scheifele just 3:12 into the 1st period.  He tried to test it out but was unable to play further and left for the dressing room.  Unsurprisingly Jets PR announced he would not be returning to the game.

Following the game when addressing the media Jets bench boss Paul Maurice said in reference to the injury “I will give you lower body & we will find out a lot more tomorrow…he was moving after so that’s a positive”.

Thursday night Bob McKenzie of TSN tweeted that the young sniper would be having an MRI today and then we would know more.  Friday Darren Dreger of TSN tweeted that Kane was “being evaluated in San Jose. Could get word of severity of injury later this afternoon.”

Jets coach Paul Maurice said this today after practice:  “He has a lower body injury that is going to keep him out of the lineup for a period of time.  He is going to get re-evaluated in two weeks then after that it will be on a week to week basis.  There is a big area in how long it takes to heal these things up.  To be quite honest with you it is better news than I was expecting.  I was really not hopeful yesterday and that’s why its good you don’t say anything about it.  Better news but he is going to be out of our lineup for the near future.”