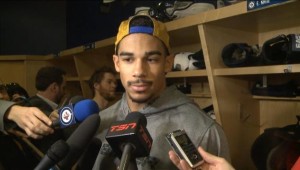 Evander Kane – His reaction to coach’s decision to keep him out of lineup.  Was there a specific message he was looking to take from the decision?  Was it unclear as to why he wasn’t playing?  Is he expecting to be back in the lineup?  Did he know in advance (of Saturday’s game) that he wouldn’t be in lineup?  What was the reason?  What is his approach to tonight’s game?  How is he feeling about his game at this point of the season?  Lined up at centre today at game skate, will he be playing centre?  Thoughts on the Wild?  His comments are more understated than the comments he made in Chicago.  Does he want to be traded?  Does he feel like he has more to prove after being a healthy scratch on Saturday?