Jets won’t be bringing back the longtime coach. 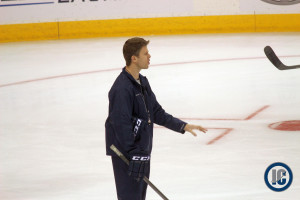 The Jets have elected not to renew the contract of Manitoba Moose head coach Keith McCambridge. I have to say that this comes as a bit of a surprise given that the fifth year head coach for the Jets AHL affiliate was given a team full of rookies this past season.  The news is especially curious when you consider that the rookies that he did have all seemed to progress, with a number (Armia, Petan, Lipon, Kosmachuk, De Leo, Morrissey, Hellebuyck) making it to the big club this season.

In four seasons with the IceCaps he missed the playoffs twice and made them twice, including a run to the Calder Cup Finals in 2013-14.

Of course there could be a lot more to the story.  Stay tuned to find out who may be replacing him.

Kevin Cheveldayoff, General Manager of the Winnipeg Jets, today announced the hockey club will not be renewing the contract of Keith McCambridge as Head Coach of the Manitoba Moose, the Jets’ American Hockey League affiliate.

“This morning we informed Keith McCambridge that we will not be renewing his contract for the 2016-17 season as Head Coach of the Manitoba Moose. We thank Keith for his professionalism, leadership, and coaching over the past five seasons as well as for his previous years of service as a Moose Assistant Coach. His commitment and hard work during two separate periods of transition for our AHL franchise should not be overlooked and is greatly appreciated. We wish Keith and his family all the best.”

The Jets also announced they will not be renewing the contract of Manitoba Moose Video Coach Will Craig.