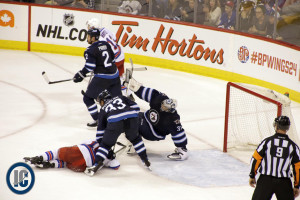 In Tuesday night’s Jets and Rangers game Dustin Byfuglien delivered a vicious cross-check to the back of the neck of J.T. Miler as the 2nd period was winding down.

Here is the video of the hit:

It was announced Wednesday that he would have a hearing with the NHL Department of Player Safety for the hit today at 9:30 AM. This afternoon they announced that Byfuglien would be subject to a four game suspension for the hit.

Here is the explanation of the suspension from the Department of Player Safety:

The suspension, which is the first of Byfuglien’s career, will cost him $111,827.96 which will go to Players’ Emergency Assistance Fund.

Good news for Jets fans is that big #33 will be back for the final game of the regular season against the Calgary Flames, which could have playoff implications.

What do you think of the suspension? Fair or foul?