Jets defencemen hit with a fine for his slash. 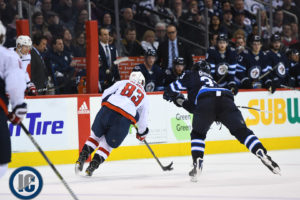 It likely saved the game for Winnipeg when Jets defenceman Dustin Byfuglien slashed the Capitals Jay Beagle who had beat him and was looking like he would score an empty net goal which would have put the visitors up 4-2 late in the 3rd period.  Instead Byfuglien headed to the sin bin for two minutes, Beagle was in a tremendous amount of pain on the bench and obviously the Jets tied the game when Mark Scheifele scored his second of the game with 14.4 seconds left in regulation.

There was some speculation after the game that the Jets big man would be fined and today the Department of Player Safety handed down a $5,000.00 fine for the slash he levelled on Beagle.

Considering that Byfuglien makes 7.6 million per season I suspect he won’t be feeling the pinch of that fine.