The Jets new bench boss met with the media for his first interview for the 2014-15 season.

The Jets new bench boss met with the media for his first interview for the 2014-15 pre-season. 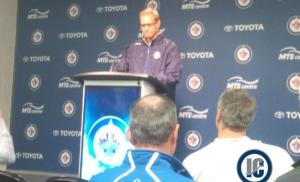 Host of the IC Hockey Show on TSN 1290 Winnipeg Drew Mindell was tweeting from the presser and here are those tweets for people who can’t listen to the audio.

– I got here July 15th. My goal for this year is to start the process of this team becoming a top 10 team. Becoming a contending team.

– We are still discovering our talent. Function of our age as a younger team. Have some experience on those “younger players”

–  We’re finding out where we are. We’re not where we need to be, based on past results, but our time is coming, but when, I don’t know.

– Our results, to this point, suggest we aren’t a contending team, but that’s the goal.

– Spent quite a bit of time this summer on changing systems to better suit our strengths.

– The players who play the most minutes, are the leaders. “Evander Kane will be a leader on this team because he will play big minutes.”

– We are going to play an exciting, aggressive brand of hockey.

– If a player can come in and play, in a meaningful way, his age will be of no factor.

– I have no aversion to youth playing, as long as he is capable of doing the job.

– Our fight was good last year. We competed hard but the consistency of the quality of our game had room to grow.

– It’s on us, as a coaching staff, to get these guys flying in the same direction.

– Some new systems coming in. A whole lot of coaching, a lot of teaching to come.

– The Blake Wheeler comments at the end of the summer were positive. One leader (Wheeler) talking to another leader (Kane).

– Both Wheeler and Kane look phenomenal. They both worked hard and improved themselves over the summer, and worked to make the team better.

– Mathieu Perreault brings speed and quickness to the team. Good faceoff guy. Skill into the lineup and a good compete level. Smart guy.

– Whomever Perreault plays with, that line will be relied on for offense. Not just defensive responsibility.

– We need to become a better defensive hockey team. Every championship team is responsible defensively.

– I didn’t mind the spin-a-rama. We’re already doing a shootout. Bring in 2 sticks, take the helmets off. (said tongue in cheek)

– Unfair to assess Ondrej Pavelec yet, because of the defensive breakdowns. We need Pavelec to be every bit better as every other player.

– Once the team is better defensively, with a better structure, then we can assess Pavelec.

– Come to training camp and you will see the areas that I’m focusing on that we need to improve on.

– We are going to spend everyday of training camp going over defensive systems and defensive responsibilities.

– This team is ready and willing to be more defensively responsible. Repetition is the key to getting better at it.

– This training camp will be punitive. This is the only time of year to really push a hockey team. The regular season just doesn’t allow.No one injured coming into today’s testing. From my understanding, everyone should be good to go for tomorrow.

– Q: would you like to see Evander Kane with a regular centre? A: Mark Scheifele. Byfuglien starts and finishes on Forward.