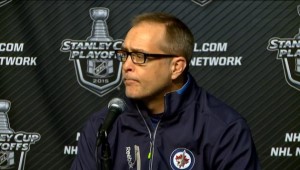 Coach Maurice – Needing his best players to be the best players on the ice.  Doesn’t see a need for his best players to “step it up”?  Discussion on the chair he is sitting in.  Any update on Perreault?  Can the level of physicality be maintained and is that to the Jets benefit?  At what point did he realize that the bench was standing around and looking?  On the improvement in Pavelec’s play.  What is the biggest thing the guys who played in their first playoff game last night take into game 2?  Did anything stand out from the tape?  On the play of Ducks d-man Vatanen.  The save Anderson made on Thorburn, is that where the game turned?  On the play of Jacob Trouba.  Is he as a coach happy to move past the first game “newness” for players and franchise and now getting into the series.  Is he seeing the proper type of bounce back from a loss?  Is he considering any lineup changes for game 2?