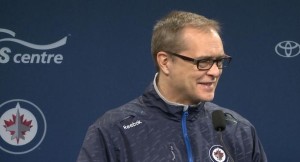 Coach Maurice –  On looking a little differently in the next two weeks.  Will Kane play during road trip?  Byfuglien & Little’s status as neither practiced today.  What does he see differently from Byfuglien this year?  On the players liking the challenge of the upcoming road trip.  Is the challenge fun?  Does he expect a boost for players as regulars return to the lineup?  Has he made any decisions on the goalie?  Returning to a rotation?  How does he see Pavelec during this stretch when he isn’t playing as often as he is used to?  A challenge to stay focused when he doesn’t play as often.  On how prospects in the system change the way they look at the lineup.  How has the process (all the injuries) been for him?  At almost mid way point in the season how does he feel about the team?  Does he expect any injured players to play this trip?  What happens with Byfuglien when everyone returns to defence?