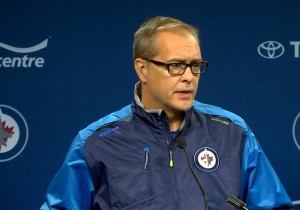 Coach Maurice – Players getting ramped up for a pre-season game.  Hard to stay engaged in the game when he is evaluating the prospects.  What will he be looking for from his rookies/what makes it a successful pre-season game from the prospects? What is the appeal of the Burmistrov/Perreault/Ehlers line?  How will he manage his goalies during pre-season?  Injury talk. Could the Burmistrov/Perreault/Ehlers benefit facing off against other team’s 3rd lines?  Was this (using a skill 3rd line) something he considered previously or is it a function of having talent?  Talking about when it was “easier” to shut down the Jets.  What is he hoping to see from Copp/Armia/Lemieux?