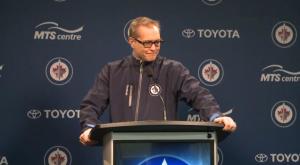 Coach Maurice –  How much of this week is physical vs. mental?  Can he make the argument that the team is not predictable in their breakouts?  To pull off his game plan what does it mean to get back his injured players?  Did Byfuglien take it to the next level against the Ducks?  What surprises him the most about the Panthers this season and does he see any similarities between the two teams?  Is that the impact of the players they brought in during off season?  On the goals against creeping up…is it as simple as fewer penalties and killing more of them or an overall thing?  He is satisfied that the guys are sticking with the system?  What is happening with the special teams?  Has he been able to accomplish in a calendar year with what he has achieved with this team?  Bryan Little good to go?