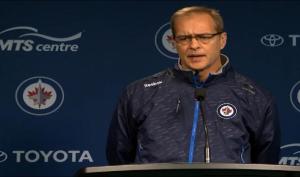 Coach Maurice – Inserting four young prospects (Lowry, Petan, Ehlers and Morrissey) into this game.  Happier with Morrissey’s game in Game 1 than in Penticton.  Thoughts on Grant Clitsome.  Does he expect to see Danny Taylor in the game tnt?  What does he look for from the Kane/Scheifele/Wheeler line?  Has he noticed the maturation of Evander Kane?  Could he be the best player?  Is the team taking the next step needing Kane to do similarly?  Ehlers in the middle?  How many games does it take to know if a prospect is NHL ready.  Does he put any stock in winning/losing in the pre-season.