He may be playing in his first NHL playoffs but Adam Lowry is getting kudos from his coach. 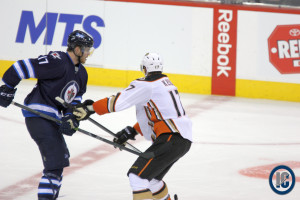 He had a long Calder Cup run with the St. John’s IceCaps last season and Adam Lowry, who comes across mature beyond his 22 years, has been a steady player for the Jets on the 3rd line for most of this season.  He played in 80 games in his first year finishing with 11 goals and 12 assists.

While it certainly hasn’t gone unnoticed by fans and the media, today his coach gave him quite a bit of praise for his level of play during the playoffs as he has been tasked with facing the other #17 in this series, Ryan Kesler.

“Adam is not going coast to coast and roofing it…yet.  We’re working on that” opened the Jets bench boss who quickly added “there have been three or four times I get caught watching him in the game.  Where I get so excited at what he’s doing right now and then you think oh my god in three, four and five years.  I loved his game.”

You can hear the full comment the coach said about big #17 here:

What do you think about the play of the Jets rookie in these playoffs?