The Jets bench boss met with the media for his first interview for the 2013-14 season.

The Jets bench boss met with the media for his first interview for the 2013-14 season. 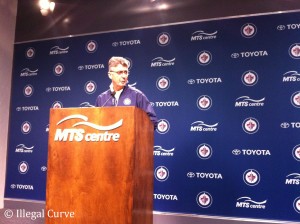 Coach Noel – Opening statement.  Off season reflections.  How does Setoguchi/Frolik fitting in?  What does it mean to have added competition?  Where is the toughest battle going to be in the roster?  Having a full training camp.  How does he feel this group fits in the Western Conference?  Different duties for the coaching staff.  What does Mark Scheifele have to do to make this team?  What did he see from Adam Lowry in Penticton?  While there will be 58 guys at camp, does he focus on the 20 he expects in camp?  How many players will be at camp (58)?  Where does he think the team has improved the most?  Moving a right side defenceman to the left side?  Will having a camp be positive for Olli Jokinen?  Schedule talk.  Can Trouba make this team?  How many games for Pavelec?  What kind of team does he want his team to be?  Dustin Byfuglien expectations.  Ian White.

For those unable to listen, here are some of the highlights:

– When you look at our roster we are setting up to have four solid lines. Lots of battles for spots.

– We are going to have to improve our checking game. Goal differential. Going to take a real commitment from players.

– Vincent working on PP. Will be upstairs for two periods. Perry runs the PK with help from Charlie. Huddy continues with D.

–  (On Scheifele) I don’t think he needs to do anything outside of what he is capable of doing. Doesn’t need to pressure himself.

– 58 players will be at camp including Jimmy Lodge (2013 draft pick) who is injured and will be wearing a red jersey at camp.

– Wouldn’t commit to moving a particular defenceman to the left side. Said will see how that shakes out with who is comfortable.

– I have a rough number with Pavelec in terms of how many games he will play. Would like to see more consistency in his game.

– I looked at him (Byfuglien) today and he looked fit.

– I’d like a team that is hard to play against. We have good speed. I’d like to use that to take away time and space.