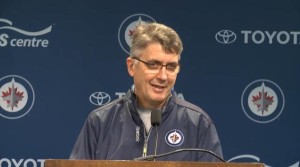 Coach Noel –  Desperate times call for desperate measures (moving Buff up front).  Is his heart in it?  What is the challenge in switching position?  Reasons for the move.  Dustin has resisted playing forward, where is his head at?  Switching up the lines.  Monitoring minutes.  Getting O’Dell an opportunity to produce.  Refreshing the lineup.  Kane injury news.  Sick players (Wheeler/Ladd) better?  Is he happy with Zach Bogosian’s growth/development?

On Buff at forward:  “He can have an impact on the game.”

On Zach Bogosian’s play: “I think this year he has played ok.  I don’t think it has been his best year so far but we are only half was through”.