Coach Noel put the players through a brisk warm-up today prior to the game against the Flyers.

Coach Noel put the players through a brisk warm-up today prior to the game against the Flyers: 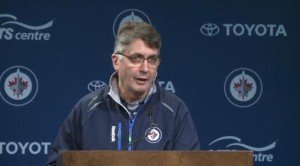 Coach Noel – Giving Pavelec more time, giving Montoya the opportunity.  How would he assess his goaltending?  How nice is it to face a Flyers team playing the second half of a back-to-back?  Plethora of defencemen.  How does he pick one through six?  Byfuglien in the lineup.  Was the road play last week due to missing Byfuglien?   Concern with games six, seven and eight.  Has he noticed a difference in players who played during lockout vs. those who didn’t?  Is Clitsome odd man odd?  Peluso?