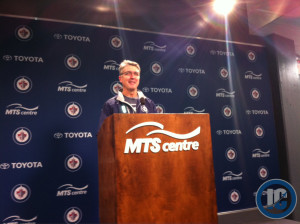 Coach Noel – Should Buff be better prepared to play forward than last year?  Buff not being over enthusiastic, is there something coach can do to increase that?  Adjusting Buffs minutes. Kane’s status (not a player).  Expectations on O’Dell.  Thoughts on Columbus.  How different are they with Horton?  What does he want to see from his team tonight?  A greater reliance on the top four?

On playing Buff at fwd: “I don’t just throw stuff on the wall and hope it sticks.  I’m trying to calculate this thing to see what works the best.”

On Buff’s enthusiasm:   “I think it is only fair that he is a bit uncomfortable….But he is willing to help the team so that’s what we are gonna do”