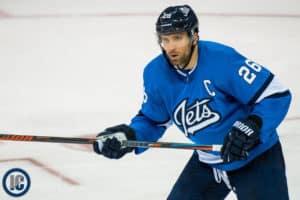 In yesterday’s contest Jets captain Blake Wheeler had two assists which helped lead his team to a 5-2 win over the Devils at Bell MTS Place.  It also meant his point streak hit 10 games and combined with Friday’s 5 points (1G 4A) earned the Jets captain 2nd Star of the Week honours from the NHL.  However it was his first assist that was significant as it meant he had become the first player with the reborn franchise to hit 500 points since relocation from Atlanta.

If you ask most players about personal achievements after a game (aside from maybe scoring a hat trick) you aren’t likely to get much of a response as most will want the focus to be on team success over individual.  Jets captain Blake Wheeler is no different from any other player so asking him about these types of personal achievements won’t likely get you much of a quote.

While you may not get a sound bite out of the captain, Jets top centre Mark Scheifele had no problems sharing his thoughts about this achievement saying post-game “He’s amazing. I say it everyday. I’m lucky to play with him.  He’s a fantastic player and he’s a great friend.  What makes him stand out is just how hard he works. Good things happen to guy’s who work hard and I’m definitely very lucky to play with him.”.

This makes Wheeler just the fourth player with a Winnipeg based NHL franchise to achieve this mark joining three names very familiar with folks around these parts:

In total Wheeler has 628 points in 794 games broken down as follows:

Quite an achievement by the Jets captain.