Read and listen to the comments newely signed centre Bryan Little had after the Jets signed him for five more years.

Hope you didn’t plan on getting a lot of work done today.  After the Olympic announcements, the Jets announced they had signed centre Bryan Little to a five year contract, avoiding arbitration. 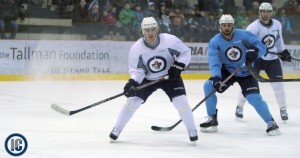 – A bit different than the last time I signed a contract

– I was confident it would get done before it went to arbitration.

– I wanted to stay in Wpg. I’ve been part of that organization since I was drafted. I think this organizations best days are ahead

– I’m not one of those guys who jumps around to different teams. I like being a part of one organization

– If I felt the team was going to struggle for five more years, I don’t sign that deal. Best days for this team are ahead

– I try and adapt as much as I can. I take pride in defence and the faceoff circle. Goals were tough to come by last season