Jets captain Blake Wheeler had a great weekend which garnered him this selection by the NHL. 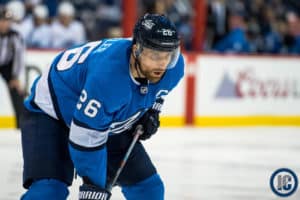 Jets captain Blake Wheeler had a great weekend after posting a four goal night on Sunday night to go along with his goal and three assists he had in the two games prior which garnered him this selection by the NHL.  The Jets had two big wins in those three games including a victory over the Predators on Friday night in Winnipeg and last night over the Blue Jackets in Columbus.