The skate moved over to the MTS Centre today. Blake Wheeler and Paul Postma spoke today.

The skate moved over to the MTS Centre today: 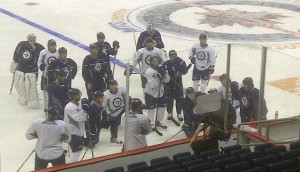 Jets: There were 17-19 guys on the ice today.  In fact it is easier to list the guys who were not on the ice than those who were on including Antropov, Ponikarovsky, Kane and Wellwood.

Blake Wheeler –  Playing in Germany.  Why he chose that league.  How the NHL and DEL compare.  His style of play.  Lockout finally ending.  A condensed schedule.  Having the Euro game advantage.

Paul Postma –  Being on a one way contract.  Playing in St. John’s.  Working with IceCaps head coach Keith McCambridge.

Audio courtesy of TSN Radio 1290 as my mic decided to not record today.