The Jets were back on the MTS Centre ice as they prepare for tomorrow’s game against the Pittsburgh Penguins. Scrums with Eddie Pasquale and Zach Bogosian.

The Jets were back on the MTS Centre ice as they prepare for tomorrow’s game against the Pittsburgh Penguins. 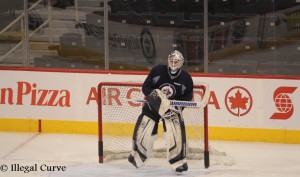 Eddie Pasquale –  His thoughts on the opportunity.  What was he doing when he got ‘the call’.  What was his reaction?  Talking about the season down on The Rock.  His development this season.  Being pushed by his fellow goalies.  How has Rick St. Croix helped him?  Is he ready for the NHL?  Which other guys does he look to?  Which parts of his game have improved?  Any indication as to how long he will be sticking around?

Zach Bogosian –  Has he gotten the go ahead for tomorrow?  If it was his decision what would it be?  Comfort playing with Hainsey?  Getting his timing back.  Has he had any set back days?  When did he resume taking slap shots?