The Jets were back on the MTS Centre ice as they prepare for tomorrow’s game against the Philadelphia Flyers.

The Jets were back on the MTS Centre ice as they prepare for tomorrow’s game against the Philadelphia Flyers. 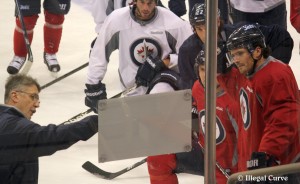 Ondrej Pavelec –   Is he ready for tomorrow?  What has he been working on with Jets goalie coach Wade Flaherty.  What did he think about Montoya’s shutout?  How tough would it have been to go in?   Big adjustment coming from play in Europe?  Flyers talk.  Tough week ahead.  Is he ready to go?

Al Montoya –  Knowing his role.  Being prepared.  What did the team do in front of him in Ottawa?  What did he like about his play against the Senators?  Pleased with the choices he made during lockout?  Does he expect to play against Flyers?  How much fun was it to beat the Sens?


Zach Bogosian – Taking things day by day.  Process to determine when he is healthy.  Any shots that he feels in the wrist?  Little bit of contact getting him ready?  Ready to drop gloves?  How tough is it to sit on the bench when he wants to play?  Being back on the road.


Mark Stuart –  Missing Byfuglien and what his return means.  Challenge of being without Bogosian/Byfuglien.  Complete defensive effort on Saturday.  How nice was it to see Montoya to get the shutout?