Today the Jets held an optional skate and not surprisingly the focus was on the return of Dustin Byfuglien to practice.

Today the Jets held an optional skate and not surprisingly the focus was on the return of Dustin Byfuglien to practice. 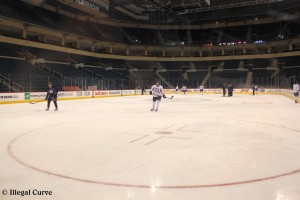 Dustin Byfuglien – Discussing how it felt to be back on the ice.  Is he good to go for Tuesday?  Talks about injury.  (includes joke about it being lower body – and then stating wax build up in his ears).  Watching the team during losing streak.  Asked about how Enstrom has improved (again makes joke about watching his tapes).  Asked about Bogosian returning soon (a third joke as Bogo walks by about him being a meatball).  Upcoming home stand.

Evander Kane –  Importance of the victory over the Senators.  How does it help the team’s mindset going forward?  How does he like his new line?  His role as a penalty killer.