Not surprisingly it was a media storm at the IcePlex following news that the CBA had been resolved. Audio from Bryan Little, Jim Slater and Zach Bogosian.

Not surprisingly it was a media storm at the IcePlex following news that the CBA had been resolved: 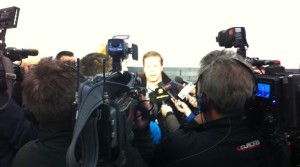 Jets: Olli Jokinen, Tobias Enstrom, Jim Slater and Bryan Little.  Zach Bogosian was skating for the first time but remains separate from the other players until the CBA is ratified.

Bryan Little – Importance to starting season well.  Ensuring you get enough rest.  Getting into game shape.  Does a shortened schedule favour the Jets?  Benefit of having teammates who played in Europe.  Expecting negative fan reaction?

Jim Slater – Getting ready for the season.  Challenges for a shortened season.  Message for fans.  Was lockout worth it?  Will players have to win back fans or will they just come back?  Expectations as to when deal will be ratified.  How difficult will it get to be in game shape?  Different levels for different players.  Does shortened season help Jets with playoff push?  Expecting negative fan reaction?

Zach Bogosian – First skate since August.  Where is he in terms of recovery.  Timeline for injury.  Has lockout been different since he was still a member of the team.  Good to have hockey back.  More difficult to be patient?  Biggest challenge dealing with the injury?  How will it impact his slap shot?  Talk about the injury specifics.  Was new CBA worth pain and suffering?  His skating timeline.  Was he experiencing any pain while holding the stick?

Lockout is over! Welcome back the NHL for the 2013 Season
Statement from Winnipeg Jets to the Community